MADISON, Wis.—96% of Venezuelan nationals who fled to Colombia to escape violence and economic collapse have no access to formal financial services—despite nearly half saying they crossed the border more than a year ago.

The new data comes from a rapid population assessment conducted in the Venezuelan border region of Colombia by the World Council of Credit Unions and Banca de las Oportunidades—a program of the Colombian national government aimed at promoting financial inclusion.

65% of the 400 Venezuelans surveyed by World Council reported a monthly income of less than 150,000 pesos—the equivalent of about US $46. More than three-quarters of the respondents said their top financial priority is opening a savings accounts, while another 20% said they needed access to credit. Nearly half said that saving to start their own business was a top priority.

Since 2016, World Council has brought financial services to over 250,000 rural Colombians living on the Venezuelan border through a project funded by the Banca program. That project will end in August, but Banca is planning to continue its financial inclusion work along the border to address the needs of the refugees.

“Our Financial Inclusion Project Along the Border with Venezuela was a major success. We surpassed our original goal of bringing financial services to 210,000 people nine months early and will finish the project having reached 40,000 more than we had hoped,” said Oscar Guzman, World Council’s project director in Colombia. “Now the question is—how do we reach these people from Venezuela? We are consulting with Banca de las Oportunidades to figure out a solution.”

The assessment also showed the need for a government-funded program. While 80% of Colombian financial institutions reported a demand for services from Venezuelans, only 12% said they are currently serving the refugee population. 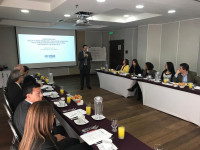