Exploring the Future for Credit Unions in Estonia

MADISON, Wis.—To find the future, you might not think to look in a small Eastern European nation tucked between Russia and the Baltic Sea. But that’s exactly where professionals from the Virginia Credit Union League (VCUL) and CULedger found it—in more ways than one—during an August WOCCU Global Classroom visit to Estonia.

The Estonian Union of Credit Cooperatives hosted “Tallinn Forum 2019”—which shined a light on innovative products and services most exchange participants had never considered.

WIRED magazine declared the former Soviet Republic as the “most advanced digital society in the world” more than two years ago, and our U.S. exchange participants learned why after seeing presentations about the government’s E-Estonia program. You can read more about that in a piece written for CUInsight by Thomas Belekevich, World Council Program Manager for Member Services.

But as visits to local credit unions showed, the innovations in Estonia aren’t just digital.

Estonia’s largest credit union is doing something quite unique.

Serving 3,000 members—many of whom are business owners—Tartu Credit Union has developed its own currency, called “Veksel.” The currency can be purchased from Tartu and then used at any of its members’ businesses.

Here’s how it works: a 10 note Veksel bill can be purchased for nine Euros and can then be used to purchase goods or services at the members’ business—at a value that’s on par with the Euro. This represents a 10% discount and encourages Tartu members to support each other’s enterprises.

Tartu also allows members to pay the interest portion of their loan payments in Veksel.

Tartu Credit Union members are also buying into a program that is both expanding wind energy in Estonia and paying them back at the same time.

Tartu has invested in five wind turbines, each capable of producing one megawatt of electricity. Members who invest in Tartu “power shares” receive an additional dividend derived from the income generated by the sale of the electricity those turbines produce. And that is on top of the interest rate paid on their shares.

“Between the amazing things E-Estonia is doing that showed exchange participants all the things that can be accomplished through digitization, and the efforts by Tartu Credit Union to innovate in ways that benefit both its members and the greater society, this is a Global Classroom visit participants will never forget,” said Belekevich. "It opened their eyes to a world of new possibilities for credit unions." 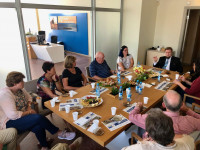 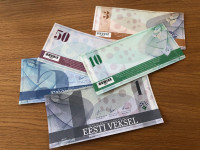