Credit union membership worldwide has grown by 90 million since the beginning of the decade—with nearly 40 million members being added since 2016.

“The global credit union movement is growing at a rapid pace as our philosophy of “people over profits” continues to resonate across six continents. We continue to see high growth among those credit unions which provide their core services via online and mobile channels. That growth has been driven by consumer demands for convenience and seamless integration into the digital economy,” said World Council President and CEO Brian Branch.

Credit union assets increased by more than 3% worldwide in 2018, while savings, loans and reserves also grew.

World Council reports data based on country responses to its annual survey and does not make estimates for non-reporting countries. The Statistical Report provides the most comprehensive data on the global credit union movement available and is cited widely by governments, international institutions and analysts as an expert resource.

You can view the full 2018 Statistical Report here. 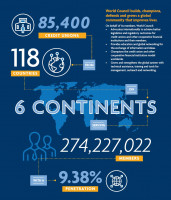