GLASGOW, Scotland—World Council of Credit Unions’ (WOCCU) President and CEO Elissa McCarter LaBorde identified the strengths of the global credit union industry and issued some challenges to its leaders in her inaugural “State of the Movement” address during Monday morning’s general session at the 2022 World Credit Union Conference.

McCarter LaBorde elaborated that she believes the global credit union movement has three specific strengths in:

But she also issued challenges to attendees, asking them to ensure their credit unions are more inclusive, resilient and green—and to identify “champions” in the movement who are pioneers in digital finance, climate resilience or sustainable finance.

“Some of you have heard this expression—you gotta go big or you gotta go home. So, I really think we gotta go big,” said McCarter LaBorde. “There are still 1.4 billion people who are unbanked. And I would argue another three billion, in the data I have seen, who are underbanked, who don’t have good financial choices and affordable credit. And that is where we are here as credit unions, with a business model that truly serves that purpose.”

Monday morning at WCUC 2022 also featured a joint presentation by Worldwide Foundation for Credit Unions and the WOCCU Credit for Agriculture Producers’ (CAP) Project on the bravery being exhibited by credit union professionals in Ukraine who are dealing with Russia’s continued assault on their country.

“I’ve talked to some farmers who are applying for a loan right now. I’m like, ‘do you dare (take a) risk like that? They say—‘it’s about food security. It’s not just about food security in Ukraine, it’s about food security all over the world. We have to take the risk.’ And the credit unions take these risks together with their members and their agricultural producers,” said Alisa Stesyshyn, a Ukrainian citizen who serves as a consultant on the CAP Project.

Ewa Sierzynska, Chief of Party for the CAP Project, explained that such decisions aren’t easy for credit unions in Ukraine, even in areas that are considered safe.

“What feels safe one day might not necessarily be safe the other. The shelters we showed in the photos were built in Vinnytsia. Vinnytsia was considered very safe. We staffed many projects originating out of Vinnytsia. It just recently got really badly hit a week ago, so, we have to be also really mindful of where we are, where we go and what decisions we make,” said Sierzynska.

The aforementioned shelter in Vinnytsia was built by the Podolian Agency for Regional Development (PARD), which used money disbursed from the Worldwide Foundation’s Ukrainian Credit Union Displacement Fund. 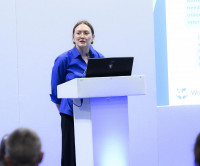