WOCCU presented a pair of 2022 Digital Growth Awards at the AGM.

Nominated by the Indiana Credit Union League, Northpark Community Credit Union (USA) received a Digital Growth Award for its Virtual Branching initiative, which was developed and implemented to deliver on a goal of closing all brick-and-mortar branches in favor of e-services and ATMs.

“We cannot underserve the underserved and we have to meet them where they are," said Carma Parrish, President and CEO of Northpark CCU, in accepting the award. "And I have so much respect for meeting people where they are, not where we are,”

“CPR Facil is making such a difference to build a better society and also changing our members’ lives. We hope that this case can be spread to other credit unions down the road,” said Estefane Chaves, a Rural Credit Analyst who accepted the award on behalf of Sicredi.

A panel of independent digitization experts selected by WOCCU judged all nominations and selected this year's winners.

WOCCU presented Marshall Boutwell, President and CEO, Peach State Federal Credit Union (USA), with the 2022 Distinguished Service Award. He was nominated by the Association of British Credit Unions Limited (ABCUL) for his long history of engagement with credit unions in Poland and Great Britain.

Boutwell was one of the original participants in the Georgia-Poland Partnership, which links credit union executives from the U.S. State of Georgia with their counterparts in Polish credit unions. Since 2016, Boutwell has also supported two different British credit unions in their development journey—offering guidance, expertise, access to his team, exchange visits and direct financial contributions to support the ABCUL Credit Unions Futures program (an immersion program to develop young leaders).

He described his experience working with credit unions in other countries as incredibly rewarding.

“This has been the most extraordinary experience in my lifetime. It has broadened my horizons, it’s made me a better cooperative leader, a better leader of my own credit union—more open to lots of different people from lots of different areas. And this is indeed a great honor,” said Boutwell.

Getting ready for the future

Are credit unions future ready? Only 31% of attendees at Monday’s general session of the 2022 World Credit Union Conference said their credit unions are ready in a poll conducted by Ian Khan, a future readiness pioneer who delivered the first keynote presentation of the Conference.

“I would have loved to have seen at least 50% of respondents here say that you are future ready, in one way or the other, but we got to have more confidence when we say we’re future ready,” said Khan, who emphasized that future readiness is not just about technology.

Khan told attendees future readiness is also about assessing where you are, where you want to go and what you need to get there. But again, only a small percentage of attendees indicated they are even thinking about those questions.

“It’s just 26% that are saying, 'yes, we do that.' Everywhere else, it’s a little bit weaker. I would have loved a much better response than this, but that’s the opportunity for us to do the work and improve,” said Khan.

The 2022 World Credit Union Conference continues Tuesday morning with the introduction of World Council’s new Board Chair and a fireside chat on international advocacy with credit union regulators from the United States and Ireland. 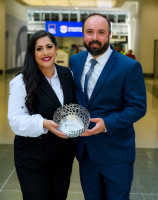