“I just want to thank you for this honor, and I really look forward to working with you in the coming year. Thank you so much,” Dykstra told attendees of Tuesday’s general session.

Dykstra will serve as Chair for a one-year term through July 2023.

The World Council Board’s committee officers for 2022-23 are:

Attendees also got to hear from two of the world’s foremost authorities on national credit union regulations Tuesday, during a panel discussion on the opportunities and challenges presented by emerging technologies.

The pair also agreed credit unions still need to ensure to do their due diligence before working with any technology firm, but managing the risk involved is workable for them and their regulators.

“There have always been emerging technologies. We look at what our resources are and can we do the mitigation. It’s understanding how the tools are going to work. We walk through the litany of activities. At the end of day, I, as a regulator, am trying to provide the regulatory framework for folks who take on these tools,” said Hood.

Hackers know just how to adapt, evolve and harness any new technology that is out in the world.

That was the message delivered during Tuesday’s virtual keynote address by Keren Elazari, an internationally recognized cyber security analyst, author and researcher with more than 20 years of experience in the cybersecurity field.

Known as “the friendly hacker,” Elazari said she has devoted her life to exposing and fixing security vulnerabilities and problems.

Elazari explained that while most of us are used to attacks through methods such as email phishing by now, hackers continue to evolve, and credit unions must be prepared.

“The most sophisticated attacks will target remote access tools like VPNs and network routers, taking advantage of tools like remote desktop protocols and remote connection passwords we’ve all come to rely on in recent years,” said Elazari.

The 2022 World Credit Union Conference concludes Wednesday with the third and final general session, featuring a keynote presentation from Belinda Parmar, OBE, CEO of The Empathy Business. There will also be medal ceremony for the 2020-21 WYCUP Scholars. 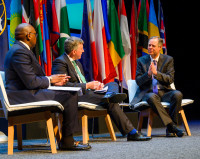 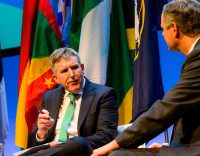