WASHINGTON, D.C.—Marshall Boutwell, President and CEO of Peach State Federal Credit Union, received the highest award Poland gives to non-citizens for his support of the country’s credit union movement during a September 14 ceremony at the residence of the Polish Ambassador to the United States.

Piotr Wilczek, Polish Ambassador to the United States, presented Boutwell with the Knight’s Cross of the Order of Merit.

Boutwell has a long history of engaging with Poland through his participation in the Georgia-Poland Partnership, which links credit union executives from the U.S. State of Georgia with their counterparts in Polish credit unions. Boutwell was one of the original participants in the program and still provides support to Peach State FCU’s partner credit union in Poland.

Ambassador Wilczek noted the Polish credit union movement owes a great debt to Boutwell for helping them develop into what now stands as an example for other countries on how to increase access to responsible financial services.

World Council of Credit Unions and the National Association of Cooperative Savings and Credit Unions (NACSCU), its direct member association in Poland, have long supported this type of exchange, which embodies the credit union philosophy of “people helping people.”

“The efforts of Marshall Boutwell have undoubtedly improved the lives of many credit union members in Poland by helping to bring responsible financial services to many who never had them before. This recognition for his relentless efforts is well deserved,” said Rafał Matusiak, President of NACSCU and Chair of World Council’s Board of Directors. 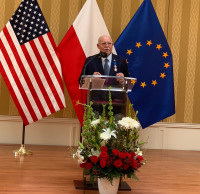 Marshall Boutwell, with Knight's Cross of the Order of Merit pinned to his coat 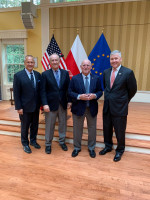