MADISON, Wis.—More than 500 members and supporters of the Global Women’s Leadership Network (GWLN) from over 30 countries welcomed a new volunteer chair and recognized one of the group’s emerging leaders at its first virtual breakfast celebration held in conjunction with Credit Union National Association’s (CUNA) Governmental Affairs Conference (GAC).

GWLN named Teresa Freeborn, a credit union executive with more than 20 years of senior management experience, as the second volunteer chair in the network’s 12-year history.

“For all those women who belong to the Global Women’s Leadership Network, I promise not to let you down. We have so much to do, but I think together we can really continue the good work of advancing women in leadership roles throughout the world, so thank you for your trust in me,” said Freeborn.

Freeborn has served as President and Chief Executive of Xceed Financial Credit Union in El Segundo, California since 2006. Xceed will be merged in April 2021 with Kinecta Federal Credit Union (KFCU), based in Manhattan Beach, California, at which time Freeborn will become President of KFCU.

She begins her two-year term as volunteer chair after GAC, replacing Susan Mitchell, who is passing the baton after serving as the founding chair since 2009.

“Rest assured that passing the baton does not mean standing down,” said Mitchell, who will continue to serve on Worldwide Foundation for Credit Unions’ Board of Directors.

The Honorable Manisha Singh, Member of the Board of Advisors for the American Foreign Policy Council and a Former Assistant U.S. Secretary of State for Economic and Business Affairs, gave the keynote address, speaking on economic stability and the role of women.

“Over 70% of women-owned SMEs suffer from inadequate or no access to financial services,“ said Singh, quoting statistics from the International Finance Corporation. “The result is more than just a lack of access to financial institutions. It impacts money spent on basic family needs, such as healthcare and education. The unbanked have lower percentages labor participation and higher rates of poverty.”

Singh noted these statistics are even more acute during the pandemic, which is why it is critical for every country to engage more women in the workforce.

“There has never been a more critical time to stand up for women,” Lena Giakoumopoulos, GWLN Program Director, told attendees. “Our collective goal was to build a network across all boundaries, cultures and languages to change societies by reaching families, women and men of all colors, sexual orientation and socio-economic status. GWLN is inclusive as we know that bridging the inequality gaps requires us to unite, stronger together.”

GWLN leaders also presented two of its annual awards during the event.

Latrice McGlothin, Community Engagement Officer with Kinecta Federal Credit Union, was named as the recipient of the 2020 Emerging Leader Award. The annual award recognizes young women active within the field who are making a significant impact on the industry and advancing the values of GWLN’s mission.

McGlothin offered tremendous support to GWLN for its first virtual fundraiser in 2020, engaged with her local Sister Society and supported the formation of the Kinecta 99s—an employee resource group for women.

“I found a great quote that said, ‘if you teach a boy, you educate an individual, but if you teach a girl, you educate a community.’ And that’s really what Global Women means to me,” said McGlothin. “My goal is to continue to move forward, to shine and to really help young women to unlock their untold stories.”

KUSCCO President and CEO George Ototo, a member of World Council of Credit Unions’ Board of Directors, accepted the award on behalf of his organization. KUSCCO and ACCOSCA are both World Council member organizations.

Sponsored by CO-OP Financial Services, CUNA Mutual Group, Kinecta Federal Credit Union and PSCU, the session highlighted the importance of advancing women, the growth of the network and the look ahead.

Since 2009, GWLN has provided a suite of programming that has provided hundreds of women with tangible skills, tools and resources to help them grow as credit union leaders. The reach of the program has also spread to 130 local Sister Societies on six continents.

The Global Women’s Leadership Network is an initiative of Worldwide Foundation for Credit Unions, the fundraising and engagement arm of World Council. Join us on a global journey to transform a billion lives worldwide using credit unions. Visit www.doglobalgood.org/btg to start your global journey and join the Bridge the Gap campaign. 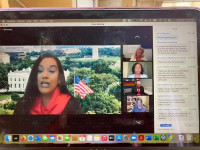