The rest of the international credit union movement grew by more than 14 million members in 2020, despite COVID-19 restrictions and lockdowns across the globe.

“On all six continents, credit unions continued to grow our movement last year despite incredible challenges by working to keep frontline staffers and members safe from infection at branch locations, while rolling out special financial assistance and relief measures to keep members solvent. Many credit unions also ramped up their digital services to make sure members could access their accounts and make payments remotely. All those efforts helped credit unions keep existing members and add new ones,” said WOCCU President and CEO Elissa McCarter LaBorde.

Assets and savings increase; loan growth stagnant in much of the world

Financial data featured in the 2020 Statistical Report shows credit union assets grew by 23% in 2020, surpassing the $3 trillion mark for the first time, while member savings grew at a much faster rate than credit union loans. This follows global trends in weaker demand for credit as well as increased risks in credit portfolio quality.

Globally, the total dollar amount of member savings went up by 24% from 2019, with loans increasing by just 11%. That difference was even more pronounced in emerging and developing markets. Savings among credit union members in Africa grew by 65% while the total dollar amount of loans increased by just 7%. In Latin America, savings grew by 14% as loans decreased from 2019 levels.

For the first time in 2020, World Council included demographic data in its Statistical Report. The data was compiled from 34 member associations that answered survey questions about the makeup of their credit union membership and leadership—specifically as it relates to age and gender.

The responses show large gaps exist in the number of women involved in the credit union movement compared to men, both in terms of membership and in chief executive or board director positions.

In Asia, Africa and Europe, men account for roughly 60% of all credit union members. The numbers are more balanced in Latin America, where women make up nearly half of all members.

“There is no question credit unions have work to do when it comes to attracting more women as members and leaders. Our movement must also examine new ways to make credit unions more relevant and appealing to young people. World Council looks forward to working with our members to address these challenges and improve outcomes in these areas,” said McCarter LaBorde.

World Council reports data based on country responses to its annual survey and does not make estimates for non-reporting countries. The Statistical Report provides the most comprehensive data on the global credit union movement available and is cited widely by governments, international institutions and analysts as an expert resource.

You can view the full 2020 Statistical Report here. 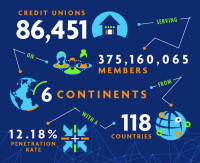