Leaders of the TIFI Project, which is funded through USAID’s Cooperative Development Program (CDP), hosted a three-day workshop with UM-PAMECAS, its partner credit union system in Senegal, to finalize the technical elements of a toolkit that will help improve credit union profitability and efficiency in issuing SME loans. The workshop also included an evaluation of a current pilot project on TIFI’s loan underwriting methodology, which has already been utilized to issue nearly $500,000 in SME loans to date, and an evaluation of IT infrastructure improvements that might be needed for UM-PAMECAS to implement a digital lending application that could automate SME lending at select credit unions.

McCarter LaBorde also visited a UM-PAMECAS’ credit union that implemented WOCCU’s Gender Investment Framework Toolkit (GIFT), a USAID-funded program that helped credit unions transform the way they underwrite loans to women and increased the share of loans to women in their portfolio. Women entrepreneurs who benefited from the GIFT program were also present to provide input on how they were able to acquire more capital, which made it possible for them to expand their income-generating activities.

“It is encouraging to hear credit union leaders acknowledge the business case for lending to women borrowers and how the GIFT tools resulted in actually lowering barriers in access for women. The next test will be to roll this out on a larger scale and move from pilot to mainstream,” said McCarter LaBorde.

From June 2020 to December 2021, WOCCU worked with UM-PAMECAS to pilot GIFT through four credit unions in Senegal, helping them reach:

WOCCU and UM-PAMECAS evaluated lessons learned from the GIFT pilot that could be integrated into the TIFI Project to further lending to more women entrepreneurs.

WOCCU also held an interactive workshop with Mastercard, the Confederation of Financial Institutions of West Africa (CIF) and the leaders of national credit union associations from Benin, Burkina Faso, Mali, Togo and Senegal to explore the co-branding of debit cards as part of a larger initiative that would allow credit unions to expand cross-border payments and remittances beyond the West African Economic and Monetary Union.

“Digitalization remains one of the key pain points of credit unions and is among my top priorities for our organization moving forward. Our vast global network of members makes a compelling case for us to bring the best-in-class services through partnerships with other global platforms like Mastercard,” said McCarter LaBorde. 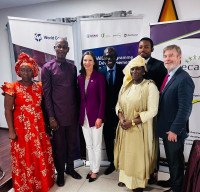