Worldwide Foundation for Credit Unions (WFCU) in December 2022 disbursed three new grants worth a total of $355,000 from its Ukrainian Credit Union Displacement Fund to help credit unions in Ukraine cover the cost of operating expenses, purchase alternative sources of power and recover the unpaid interest on loans as part of its continuing effort to provide relief amid Russia’s ongoing full-scale invasion of Ukraine.

Under martial law, military personnel in Ukraine are exempt from paying interest on their loans, which limits the ability of credit unions to provide new lending. The Worldwide Foundation’s Servicemen Interest Compensation Program reimburses credit unions on that lost interest, which helps them continue to lend to more people in wartime. 42 associated credit unions applied for the program and have already received compensation totaling $170,000.

With growing inflation and an economic recession enveloping the country, credit unions also find it harder to stay fully operational and serve their members like they did before the war. To support them, WFCU spent a total of $130,000 under its Covering Operational Expenses Program to compensate 75 credit unions for a portion of their operating expenses.

Russia’s constant shelling of Ukraine’s critical infrastructure and power grid has resulted in blackouts across the country, depriving credit unions of the electricity needed to maintain daily operations. To address this challenge, WFCU’s Alternative Power Sources Program co-financed the purchase of alternative energy sources for credit unions. This enables credit union staff to serve their members even during power outages. A total of 91 credit unions each received $600 to put toward the purchase of power generators, power stations or power banks.

Grant dollars from the three new programs went to nearly 100 credit unions, which comprise more than two-thirds of Ukraine’s entire credit union market. The assistance is critical as credit unions continue to support their communities during nearly a year of ongoing war in Ukraine.

“Thanks to WOCCU and WFCU efforts, as well as donations from the global credit cooperative community, Ukrainian credit unions have received invaluable assistance. In these difficult times for our credit unions, the assistance provided has been a significant contribution to the support and preservation of the Ukrainian credit union movement. Your support emphasizes that all of us, together, make up a large global credit cooperative family,” wrote Olga Tugai and Volodymyr Sydorovsky, managers of the All-Ukrainian Credit Union Association, in their joint letter of appreciation to Worldwide Foundation for Credit Unions.

The three new grant programs are the latest in WFCU’s ongoing effort to assist credit unions and their members through the Ukrainian Credit Union Displacement Fund.

Under its Fuel Disbursement Program, WFCU tapped the Displacement Fund in October 2022 to purchase $100,000 worth of diesel from Ukrainian national fuel station chain OKKO, and provided a total of 1,329 free fuel coupons to Ukrainian small- and medium-sized farmers who took out agricultural loans at credit unions that partner with the USAID/WOCCU Credit for Agriculture Producers (CAP) Project.

Through an account set up in collaboration with Ridnia, a Ukrainian NGO, another $100,000 grant was disbursed in June 2022 to reimburse eligible CAP-partner credit union member farmers on 10% of their agricultural loan principal payments. To date, $70,000 has been distributed from that account to repay 10% of the loan principal for more than 1,000 member farmers.

WFCU in March 2022 awarded a $50,000 Displacement Fund grant to the Podolian Agency for Regional Development (PARD), a Ukrainian non-governmental organization that is providing humanitarian assistance to hundreds of refugees from Kyiv, Kharkiv, Mariupol, Kherson, Melitopol and other cities who sought refuge in the Vinnytsia region of western Ukraine. PARD used part of the WFCU grant to assemble a temporary shelter, and also worked to purchase and deliver food, water, medicine, bedding and other supplies to internally displaced Ukrainians.

To date, Worldwide Foundation for Credit Unions has now disbursed more than $600,000 from its Ukrainian Credit Union Displacement Fund to assist credit unions, their members and their communities that are struggling during wartime.

“We continue to be overwhelmed by the support of the international credit union community, which has now donated nearly $2 million to the Displacement Fund in less than one year. We will keep looking for ways to provide aid to credit unions during the war, while keeping money on hand for the eventual restoration and rebuilding of Ukraine’s credit union system,” said Mike Reuter, WFCU Executive Director.

The Worldwide Foundation is the fundraising and engagement arm of the World Council. Join us on a global journey to transform a billion lives worldwide using credit unions. Visit www.doglobalgood.org to start your journey today. 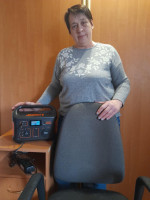 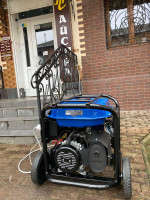 A generator purchased by Credit Union Taystra in Ivano-Frankivsk Oblast