ENCU and WOCCU representatives meet with key stakeholders in Brussels

ENCU representatives were joined by WOCCU President and CEO Elissa McCarter LaBorde and her International Advocacy team in meetings with numerous policymakers to discuss how credit unions can play an important role in the economic recovery of Europe—which is still struggling from the effects of the COVID-19 pandemic and the ongoing conflict in Ukraine.

“Credit unions are often the financial first responders during a time of crisis. However, they need regulations that are tailored to their member-owned cooperative model to help maximize their ability to serve rural or underserved markets,” said Andrew Price, WOCCU Senior Vice President of International Advocacy and General Counsel.

European policymakers appear to be listening, as numerous items under consideration contain language that allows for the proportional tailoring of regulations, including the Digital Operational Resilience Act, which gives national-level supervisors the ability to set standards for credit unions.

On other issues such as sustainable finance, credit unions are being recognized for their role in addressing climate change and the social benefits that the credit union cooperative model brings to financial services. Affordable access to payments systems, capital requirements and many other issues affecting credit unions are also under discussion.

“We must allow credit unions the ability to serve underserved and rural areas that are in need of responsible access to credit. The credit union model represents an ideal way to help ordinary citizens with their financial needs. This is imperative during this time of economic uncertainty in the EU,” said Billy Kelleher, an Irish Member of the European Parliament (MEP) who also co-chairs the European Union Parliamentary Credit Union Interest Group. 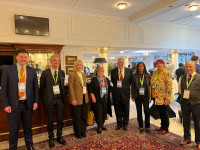 ENCU and WOCCU representatives in Brussels